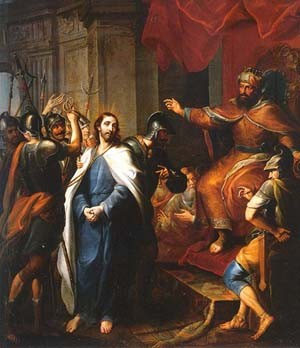 Today in the Gospel we see that the fame of Jesus spreads and reaches the ears of Herod Antipas, tetrarch of Galilee and Perea, the murderer of John the Baptist. This Herod was the son of Herod the Great, he of the innocents of Bethlehem. His attitude seems very superficial, of mere curiosity. He is puzzled, because he has heard that some consider Jesus to be the risen John, whom he had had beheaded. This Herod is the one that Luke later says that he threatens to get rid of Jesus and receives from him a harsh answer: «Go and tell that fox …» (Lk l 3.3132). In the passion, Jesus, who had answered Pilate, did not want, on the contrary, to say a word in the presence of Herod, who continued to desire to see him, because of the things he heard from him «and expected to witness some sign or miracle» ( Lk 23.8-12).

Before Jesus there have always been diverse reactions, more or less superficial. Then some believed that it was Elijah, who had already been announced that he would return (Jesus clearly stated that this announcement of Malachi 3:23 had been fulfilled with the coming of the Baptist, his Precursor). Others, that John or one of the ancient prophets had resurrected. On Herod’s part, the interest stems from his desire to witness something spectacular. Others reacted totally against it, with a determined will to eliminate it. In today’s world, on the part of some, there is also curiosity and little else. If they saw him on the street, they would ask for an autograph, but they would not be interested in his message. Others look for the marvellous and miraculous, which Jesus did not like at all: «this evil generation asks for signs.» For others, Jesus doesn’t even exist. Others consider him a «superstar», or a great man, or an admirable teacher. Others are radically opposed to his message, as it happened then and has continued for two thousand years. Literature abounds about Jesus, who has always been an exciting figure. A literature that in many cases is morbid and commercial.

Only those who approach him with faith and simplicity of heart gradually understand his identity as God’s envoy and his saving mission. We are of these. But do we also help others to learn about all the wealth of Jesus? There are many people, young and old, who also in our generation «want to see Jesus», although sometimes they do not realize who they are really looking for. We should bear witness, with our lives and our timely word, that Jesus is God’s full answer to all our searches.